You can find on this page the Germany geographical map to print and to download in PDF. The Germany geographic map presents the topography, elevation, rivers, mountains, climate and physical features of Germany in Europe.
Germany is a country in Central Europe stretching from the Alps, across the North European Plain to the North Sea and the Baltic Sea as its shown in Germany geography map . 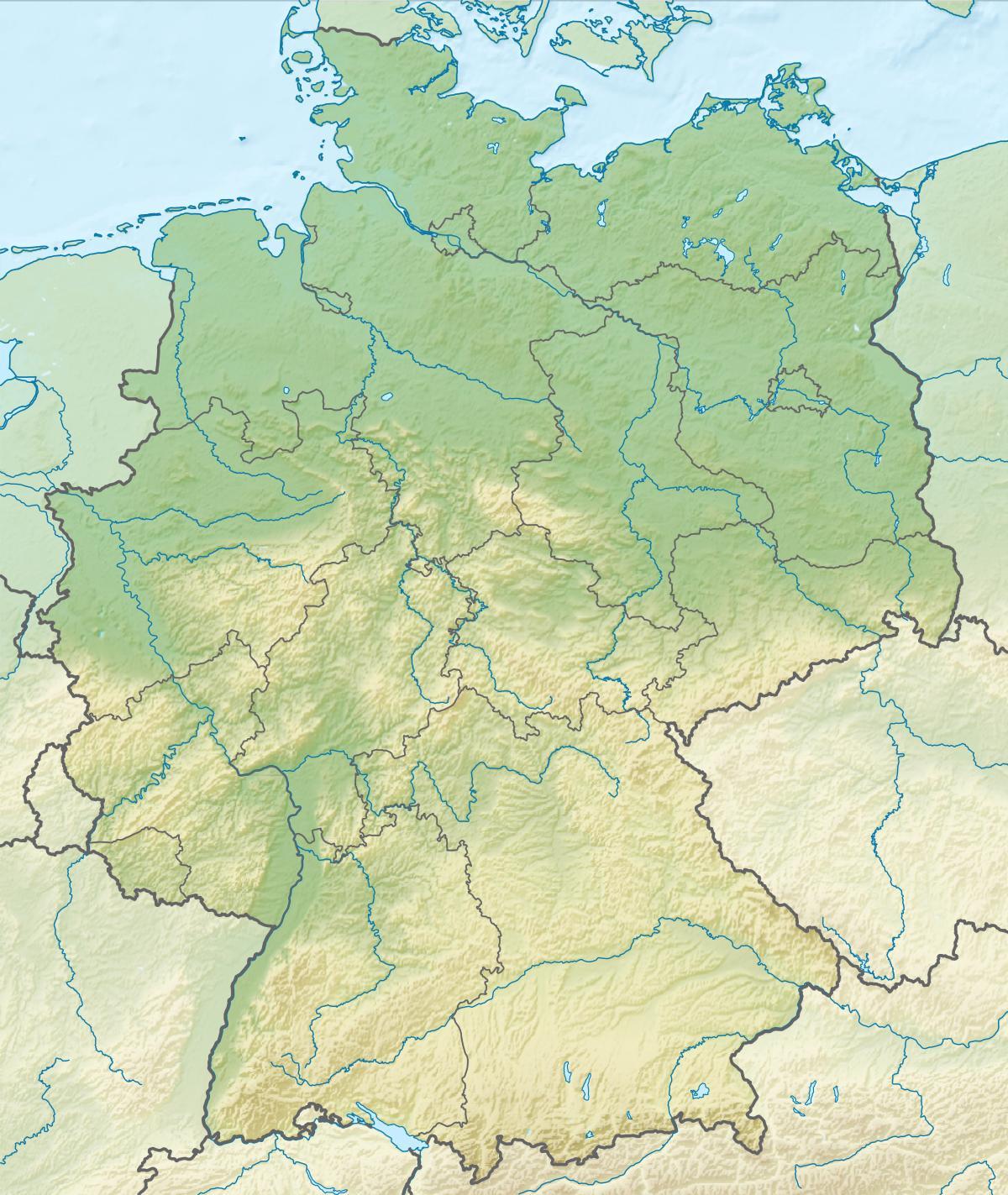 Germany has 1,485 miles (2,389 kilometers) of coastline facing the North Sea to the west and Baltic Sea to the east as its mentioned in the Germany physical map. A break in the coast is created by the Jutland Peninsula, which predominantly belongs to Denmark (although the southern half of the peninsula is occupied by the German state of Schleswig-­Holstein). The two seas are connected south of the peninsula by the Kiel Canal. Germany has a 12-mile physical territorial water limit and a 200-mile exclusive economic zone, which represent a mutually agreed upon international standard.

Major physical landforms in Germany include the volcanic in origin Harz Mountains and the thickly wooded Rothaargebirge Mountains. Further south the rounded hills and mountains of the Eifel and Huynsruck uplands front the Rhine River Valley as you can see in the Germany physical map. Moving eastward through Germany, the Vogelsberg Mountains, Rhon Plateau (or Mts.)

Germany covers a total of 357,021 km², of which 4,750 km² is irrigated land and 7,798 km² is covered by water, the largest lakes being Lake Constance (total area of 536 km², with 62% of the shore being German; international physical borders are not defined on the lake itself), Müritz (117 km²) and Chiemsee (80 km²). The majority of Germany is covered by either arable land (33%) or forestry and woodland (31%) as its shown in the Germany physical map. Only 15% is covered by permanent pastures. 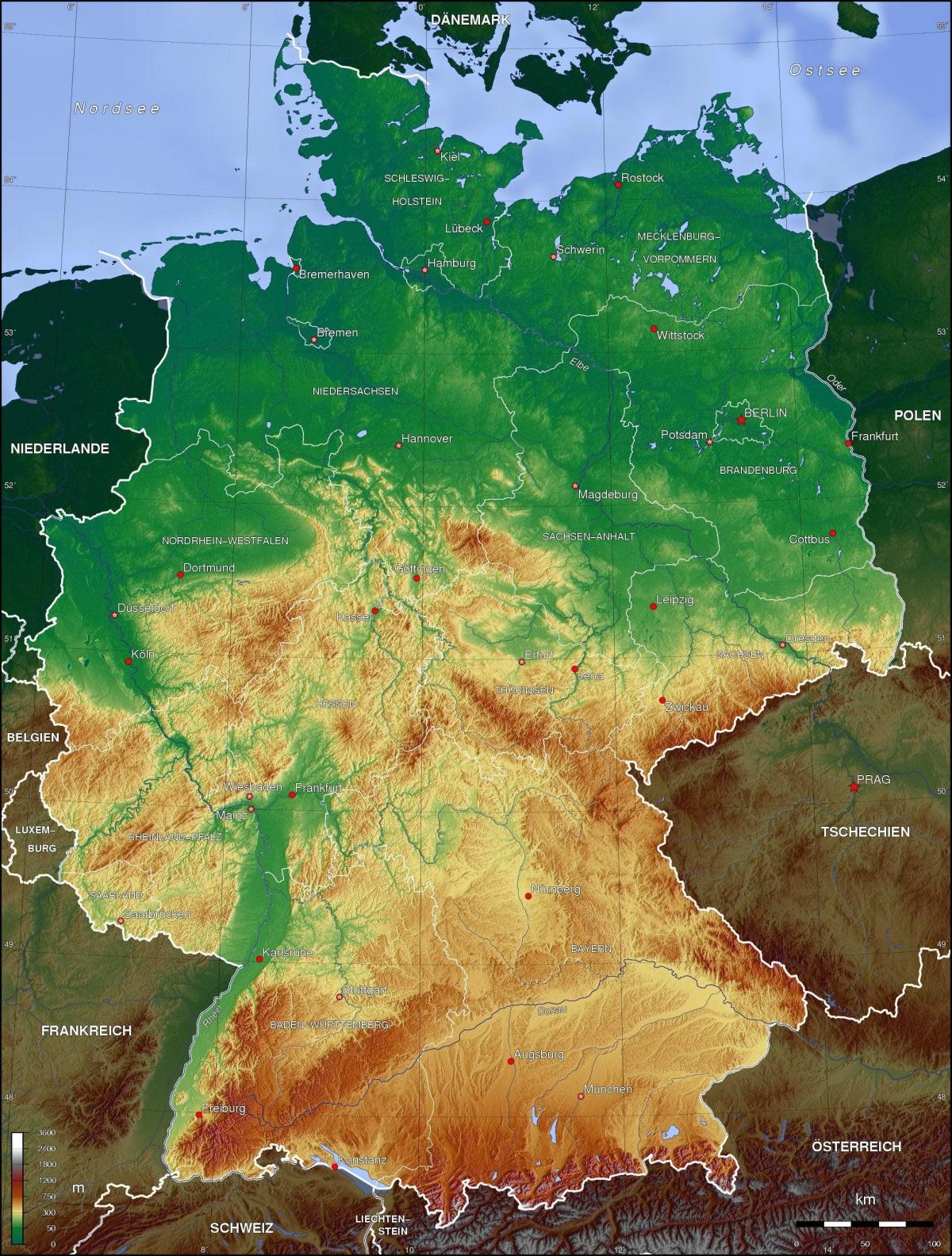 Germany continental glaciation, the advance of huge ice masses during the ice age, has left deposits of clay, gravel, and sand across the plain, which accounts for the soil limited fertility. The natural vegetation across the North German Plain as you can see in Germany topographic map would be deciduous forest; however, most of this topographic woodland has been removed to clear land for farming during the past 1,000 years.

Germany topographic plain dotted with lakes, moors, marshes, and heaths retreats from the sea and reaches inland, where it becomes a landscape of hills crisscrossed by streams, rivers, and valleys. These hills as its shown in Germany topographic map lead upward, gradually forming high plateaus and woodlands and eventually climaxing in spectacular mountain ranges. Much of the Central Uplands region is forested. River valleys have alder, willow, and poplar where it is wet, and oak, ash, and elm in drier locations. Maple, chestnut, and walnut trees are also found in some areas. In the nineteenth century, the forests were cut to provide charcoal for the smelting of local iron ores into metal goods. 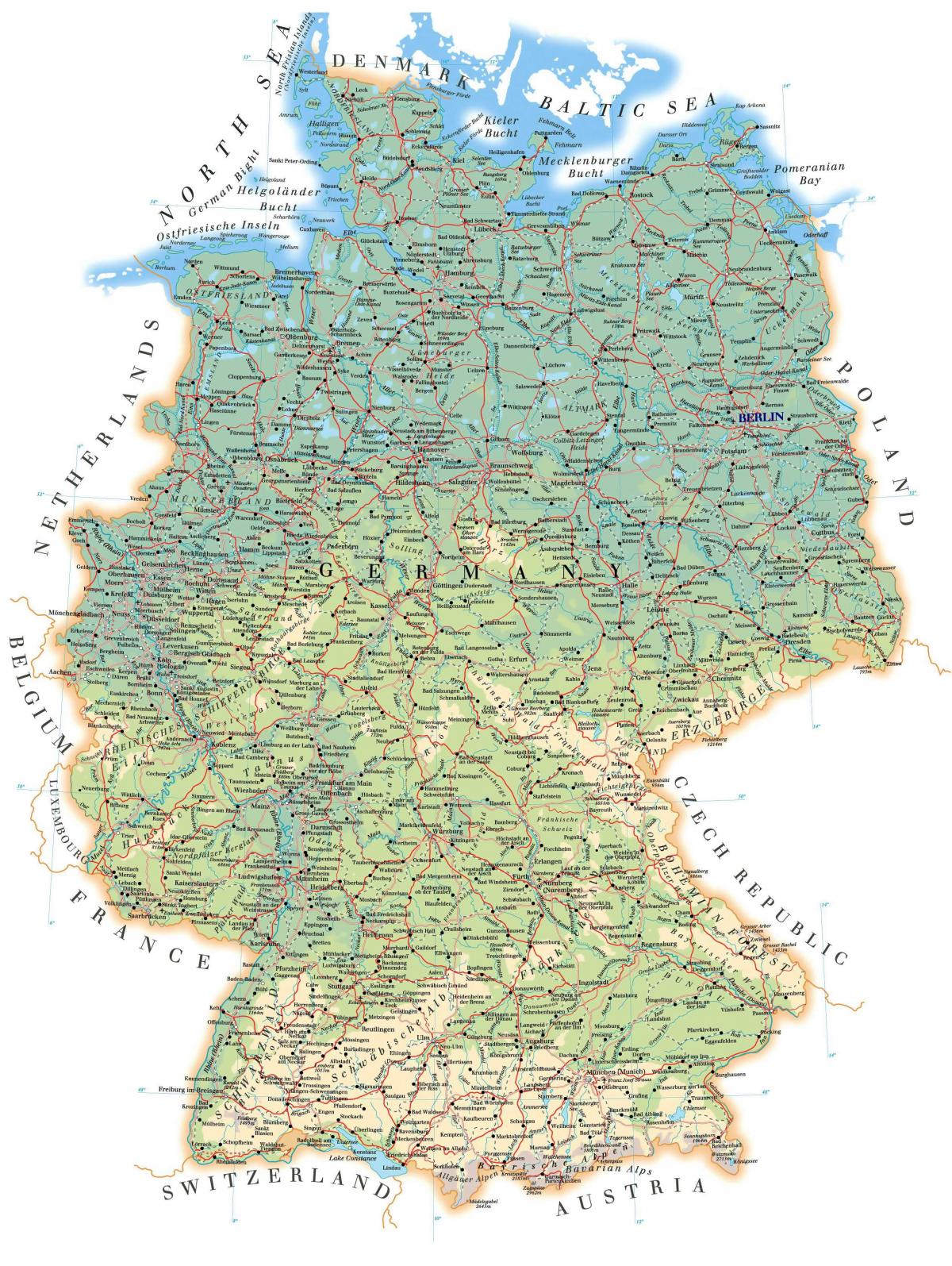 Elevation ranges in Germany from the mountains of the Alps (highest elevation point as you can see in Germany elevation map is the Zugspitze at 2,962 metres (9,718 ft)) in the south to the shores of the North Sea (Nordsee) in the northwest and the Baltic Sea (Ostsee) in the northeast. Between lie the forested uplands of central Germany and the low-lying lands of northern Germany (lowest point: Neuendorf-Sachsenbande at 3.54 metres (11.6 ft) below sea level), traversed by some of Europe's major rivers such as the Rhine, Danube and Elbe. The terrain can be divided into three regions that increase in elevation from north to south. Each is unique in terms of natural resources and human activities.

The Zugspitze, at 2,962 metres elevation above sea level as its shown in Germany elevation map, is the highest peak of the Wetterstein Mountains as well as the highest mountain in Germany. It lies south of the town of Garmisch-Partenkirchen, and the border between Germany and Austria runs over its western summit. South of the mountain is the Zugspitzplatt, a high karst plateau with numerous caves. On the flanks of the Zugspitze are three glaciers, including the two largest in Germany: the Northern Schneeferner with an area of 30.7 hectares and the Höllentalferner with an area of 24.7 hectares. The third is the Southern Schneeferner which covers 8.4 hectares.

The lowest elevation part of Germany lies in the middle of the marsh. 3.54 m under sea level (Normallnull or NN, as North Germans call it) or in other words: if it were not for the dikes, the water would rise up to 8 m high during storm surges. Neuendorf-Sachsenbande is a municipality in Wilstermarsch, in the district of Steinburg, in Schleswig-Holstein, Germany. The town is notable for containing the lowest accessible point in Germany, which is 3.539 m (11.61 elevation ft) below sea level as its mentioned in Germany elevation map. 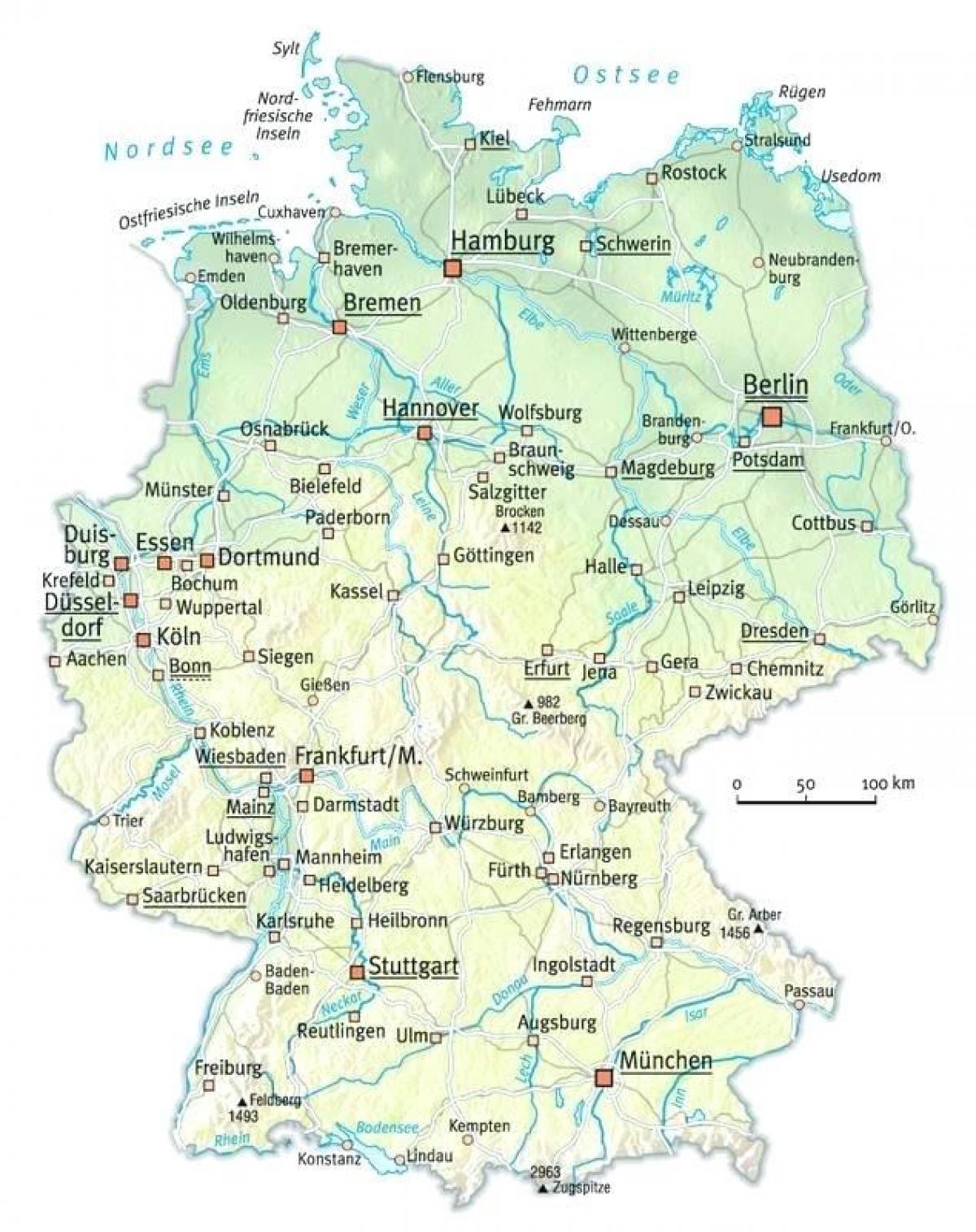 The rivers in Germany map shows the principal rivers with their names of Germany. The rivers map of Germany will allow you to find the main rivers which flow in and through Germany in Europe. The Germany rivers map is downloadable in PDF, printable and free.

The greater part of the country drains into the North Sea via the Rhine, Ems, Weser, and Elbe rivers, which flow in a north-northwest direction. In the east, the Oder River and its tributary, the Neisse River, flow northward into the Baltic Sea and mark the border with Poland as you can see in Germany rivers map. With the exception of the Lahn River, which flows southward before joining the Rhine, most of the tributaries of these rivers flow in a west-to-east or east-to-west direction.

The German territory is comprised of five large river basins (the Elbe, upper Danube, Rhine, Weser and Ems as its shown in Germany rivers map), three medium-scale basins in the coastal area (Eider, Schlei/Trave and Warnow/Peene), and small parts of the Oder and Meuse basins. Of the large river basins, only the Ems and Weser basins lie entirely within the borders of Germany. The Rhine, upper Danube and Elbe are international rivers and their drainage basins have large parts outside Germany.

The Rhine, Germany longest and most important river, originates in Switzerland, from where it flows into Lake Constance (actually a river basin). At the lake west end, it begins a long course (800 kilometers) to the Netherlands, at first marking the boundary between Germany and Switzerland and later that between Germany and France. The three main rivers in Germany as its mentioned in Germany rivers map are: the Rhine (Rhein in German) with a German part of 865 km (main tributaries including the Neckar, the Main and the Moselle (Mosel)); the Elbe with a German part of 727 km (also drains into the North Sea); and, the Danube (Donau) with a German part of 687 km. Further important rivers include the Isar in the southeast, the Main in central Germany, the Neckar in the southwest, and the Weser in the North. See also the list of rivers in Germany. 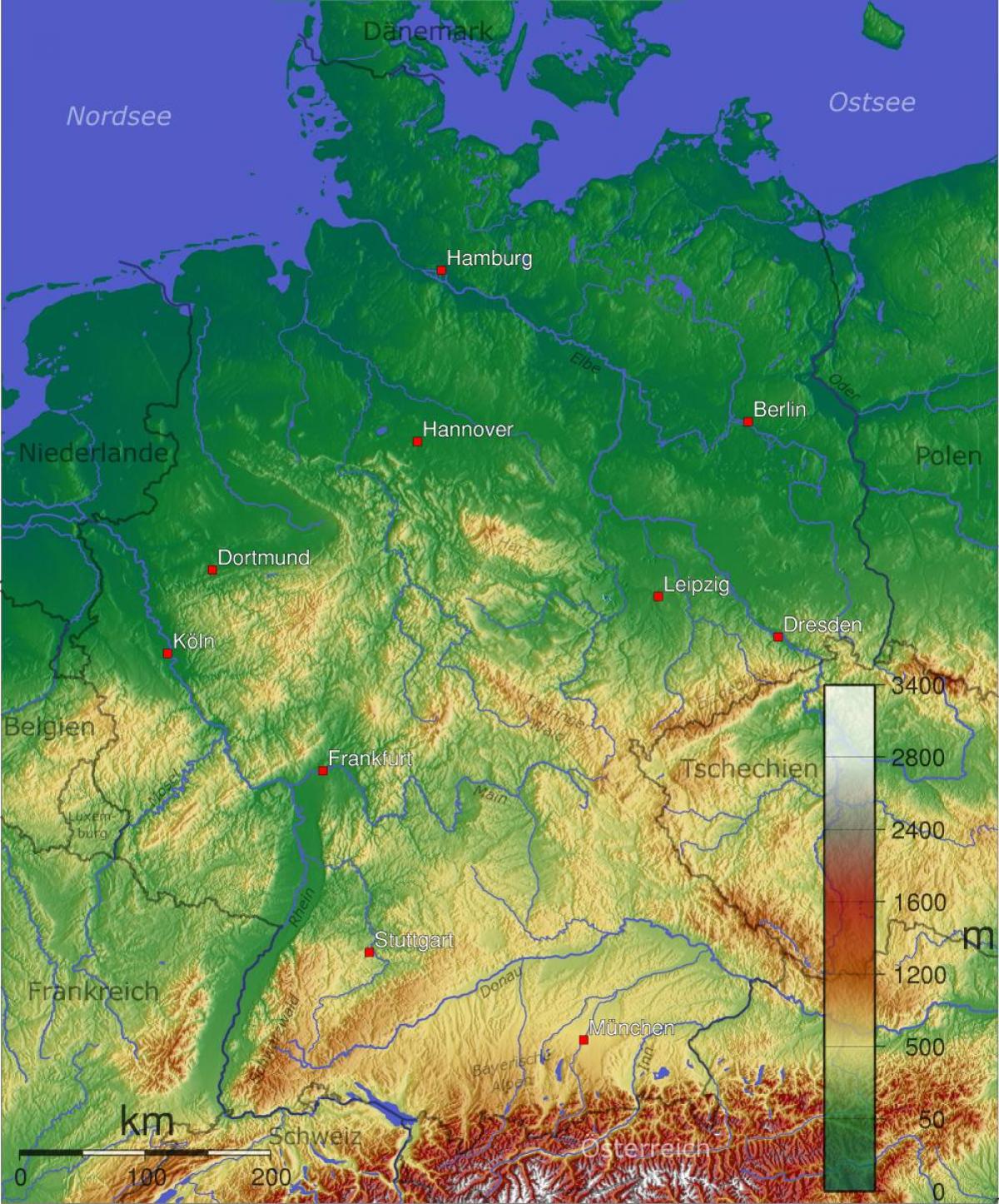 There are 37105 named mountains in Germany. The highest and the most prominent mountain is Zugspitze as its shown in Germany mountains map. The Westerwald is a beautiful low mountain range in Germany. It encompasses the border triangle of North Rhine-Westphalia, Hesse and Rhineland-Palatinate, and belongs to all three federal states, geographically speaking, as a result.

Bavarian Alps, German Bayerische Alpen, northeastern segment of the Central Alps along the German-Austrian border. The mountains extend east-northeastward for 70 miles (110 km) from the Lechtaler Alps to the bend of the Inn River near Kufstein, Austria. The mountains hold lignite mines and petroleum deposits and are crossed at Scharnitz Pass (3,133 feet [955 metres] as its mentioned in Germany mountains map) by road and railway and at Achen Pass (3,087 feet [941 metres]) by road.

Low mountain ranges, called “Mittelgebirge” in German, are mountain ranges that do not exceed a certain height (the tree line or about 1,200 to 2,000 metres as you can see in Germany mountains map) and whose highest elevations did not come into contact with glaciers during the last ice age. In addition, these kinds of massifs must have a certain height difference between the highest point and the foot of the mountain, in order to distinguish them from a landscape that’s simply hilly. 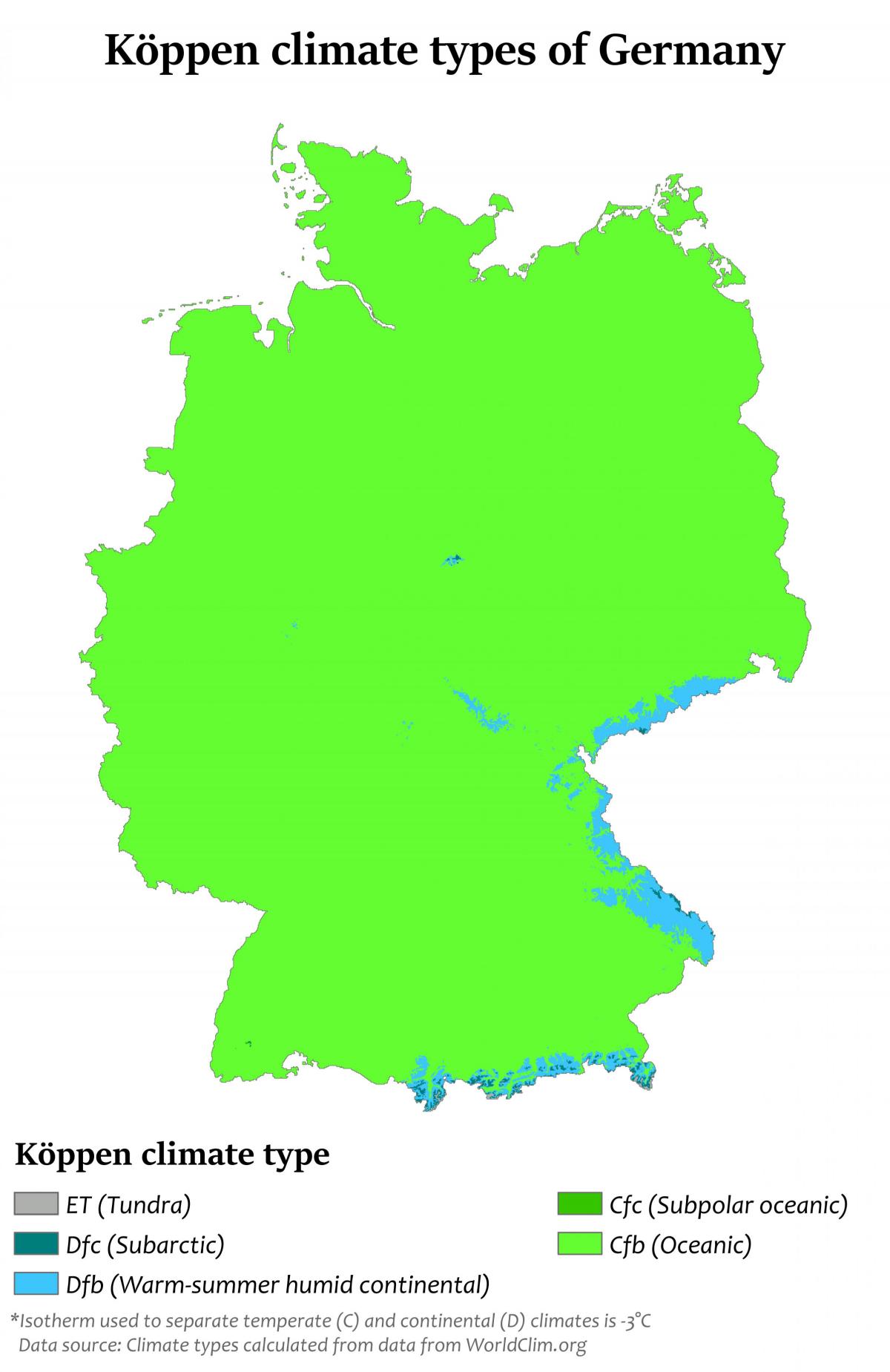 Germany climate is temperate and marine, with cool, cloudy, wet winters and summers and in the south occasional warm föhn wind. The greater part of Germany lies in the cool/temperate climatic zone in which humid westerly winds predominate as its shown in Germany climate map. In the northwest and the north the climate is extremely oceanic and rain falls all the year round. Winters there are relatively mild and summers comparatively cool. In the east the climate shows clear continental features; winters can be very cold for long periods, and summers can become very warm. Here too, long dry periods are often recorded.

In the centre and the south of Germany there is a transitional climate which may be predominantly oceanic or continental, according to the general weather situation as its mentioned in Germany climate map. Winters are mild and summers tend to be cool, though maximum temperatures can exceed 30 °C (86 °F) for several days in a row during heat waves. The warmest regions of Germany can be found in the south-west (see rhine rift, German Wine Route and Palatinate). Here summers can be hot with a high number of days exceeding 30 °C (86 °F). Sometimes minimum temperatures don't drop under 20 °C (68 °F), which is relatively rare in other regions.

Germany has a temperate climate throughout the country with warm summers and cold winters, however long periods of frost or snow are rare. Rain falls throughout the year. The average monthly January daytime temperature is 3 degrees Celsius (38 degrees Fahrenheit) and in July it is 22 degrees Celsius (72 degrees Fahrenheit). Extremes temperatures as you can see in Germany climate map sometimes reach -10° C (5°F) in winter and 35 ° C (95° F) in summer months.